The art of belly dance is explored through a series of sequential classes mindful of proper posture and safe dance technique, perfecting traditional belly dance movements while providing students with a vocabulary of movement unique to Belly dance. Students will learn how to use space, incorporate arms, vary movements, increase muscular control, engage the audience, and interpret music. There are three levels of study offered, with required accomplishments to move to the next level. Over time, students will be encouraged to develop strong and unique dance skills for performance. These classes are fun and fulfilling for all ages…

Repeat until all skills are assimilated…
No prerequisites for this class, just an open mind – let’s do it!! 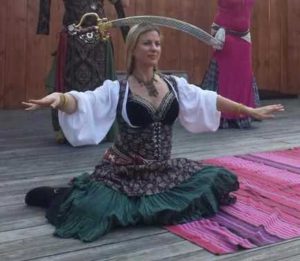 For the nominally experienced dancer, includes exploration of complex layered movements, combinations and simple choreography, introduction to finger cymbals and various styles of Middle Eastern Dance are  incorporated.
Prerequisite:  Ability to execute basic steps and body isolation technique and to follow simple combinations of movements. Interview recommended prior to registration.

Prerequisite: Three years or more of continuous study.  Interview and audition may be required. Ability to execute movement transitions necessary to assimilate choreography. Understanding of rhythms for finger cymbal work

This is a Performance Level Class for troupe members of Ragsidad.

Prerequisite: Three years or more of continuous study.  Interview and audition may be required. Must be able to play finger cymbals while dancing, have familiarity with props, ability to quickly learn combinations and choreography and willingness to buy or make costumes for performance opportunities.

A workout for Intermediate and Advanced students alike. It starts with a warm up, then one full hour of across the floor and combinations to add to the dancers’ movement vocabulary, ending with a cool down. Bring Finger Cymbals!
Prerequisite  Intermediate or Advanced level training.  Meets July 2-August 6

Belly Dance for your health:

Belly dance is a low-impact, weight-bearing exercise suitable for all ages. Correct posture and muscle control is as important in belly dance as in other fields of dance. Isolation of particular muscle groups is practiced to accomplish the shape of the signature movements of the dance form. Attention to posture during execution of these movements strengthens the spinal column and abdominal muscles in a gentle way, improving overall flexibility through the torso and spine. Working with props like veils and canes help to build upper body, arm and shoulder strength. Playing the zills (finger cymbals) trains fingers to work independently adding to coordination skills. 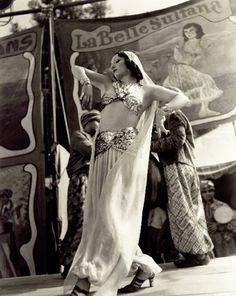 Belly Dance became popular outside the Middle East during the Romantic movement of the 18th and 19th centuries. Dancers from Middle Eastern countries would perform at various World’s Fairs, often drawing crowds in numbers that rivaled those for the science and technology exhibits. The Chicago World’s fair spurred North American interest in belly dance by shocking a reserved Victorian society with uncorseted dancers that gyrated their hips.

As belly dance became more popular and there were more people imitating this style there were also more people becoming outraged at what they saw as immodest. Dancers started being arrested and fined. It seems mainstream society was not ready for this dance. Often when things become taboo they bloom. As the dance evolved people started calling belly dance the Hootchy Kootchy or the Shimmy Shake and 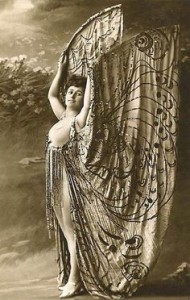 Hollywood began to capitalize on the fascination with a series of films featuring exotic belly dancing characters.”Fatima’s Dance” was one such film. It was eventually censored after receiving much criticism for it’s “immodesty”. While some movies played on the prevailing idea of dancing ladies being women of loose morals other’s, such as the silent film “Intolerance”, aimed to change the perception so belly dance would be seen as a respectable art form. But once it was set as taboo, people flocked to burlesque theaters as well as carnivals and circuses to sneak a peek of these dancing ladies. It was the 1930s as more immigrants came in from the Arab states that nightclubs and restaurants began having dancers perform too. In the late 1960s and early ’70s many dancers began teaching. Middle Eastern or Eastern bands took dancers with them on tour, which helped further interest in belly dance. 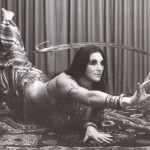 Although using traditional Turkish and Egyptian movements, American Cabaret or American Restaurant belly dancing has developed its own distinctive style, using props and encouraging audience interaction. Many modern American dancers also make use of the music of Egyptian Sha’abi singers in their routines. In 1987, a uniquely American style, American Tribal Style Belly Dance, (ATS), was created. Although a unique and wholly modern style, its steps are based on a melting pot of ancient dance techniques including those from North India, the Middle East, and Africa. Many forms of “Tribal Fusion” belly dance have also developed, incorporating elements from many other dance and music styles including flamenco, ballet, burlesque, hula hoop and even hip hop.